Mike and Ray Forrest, current owners of Forrest Marine Ltd are the third generation of a family who have lived and worked on the river. The business is located on the family homestead at the foot of Pitt River Road in Port Co 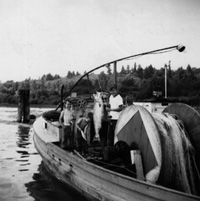 quitlam, the place where the Pitt and Fraser rivers meet. In 1916 Mike and Ray’s grandparents, Samuel and Hilda Forrest, towed their float house with their two children upriver from Annacis Slough to the present day site of Harken Towing, just downstream of where the PoCo shipyard used to be.

Samuel worked there until it closed in 1918. Around 1930, he moved their float house up to the government wharf at the foot of Pitt River Road, next door to the family’s present day home. Samuel died in 1935 and Hilda and her three young children were on their own in the “Flower Float House”, as it was known up and down the river for its colourful blossoms.

Harvie (Mike and Ray’s Father) and Eve were still in their teens when their Father Samuel died. They inherited two small boats, the Harvie W and Old Faithful and set out working on the river as Pitt River Towing.

The float house was badly damaged by ice in 1939, and a new log float and house were built to serve as both home and ‘dock’ for their three tugs – the Wayfarer was the new addition. 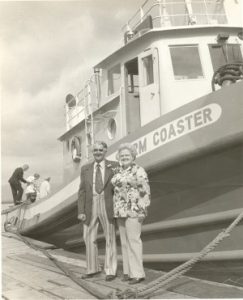 Nel Forrest (Mike and Ray’s Mother) remembers the house as a busy place, with boats coming and going. “Many passing tugs stopped in to use the phone for their orders as there were no phones on boats yet”. Nel and Harvie married in ’44 and in 1946 they purchased the one acre shipyard site and the saw mill, which they operated for 10 years. At that time the house was on a float sitting in front of where it is now, it was the dock for their tugs.

r of the big Fraser River Flood, they had an extra 10 feet of water to suffer with. They decided to push the house ashore to save it from the raging flood and they just kept pushing the house back until it stopped. Today the family home rests on a proper foundation about 100 feet up the slope and Nel still lives there with her daughter Joy and husband Tony, enjoying the panoramic views of the river she’s shared with four generations.In 1948 Harvie went into partnership with Ken Mackenzie and they started Harken Towing Ltd. and built the Harken #1. Eventually Harvie sold out to Ken. The Forrest Family continued on towing, fishing and sawmilling under the name of Harvie Forrest Industries Ltd. They built and operated 3 ocean going tugs.

Mike and Ray have worked side by side since they were old enough to help their Father. They grew up on the river commercial fishing (gillnetting salmon in the river and on the coast),beachcombing (log salvaging) and towing. Now with wives Karen and Jackie they still work side by side as co-owners of Forrest Marine Ltd.In 2010 Forrest Marine Ltd. was inducted into the “Fraser River Hall of Fame” by the Fraser River Discovery Centre, which recognizes the significant and long standing contribution of the Forrest family to the Fraser River.

All Content is ©2015 – 2020 Forrest Marine Limited
Web Design and Hosting by Red Fish Web Solutions Ltd.
Based on the GeneratePress Theme using WordPress